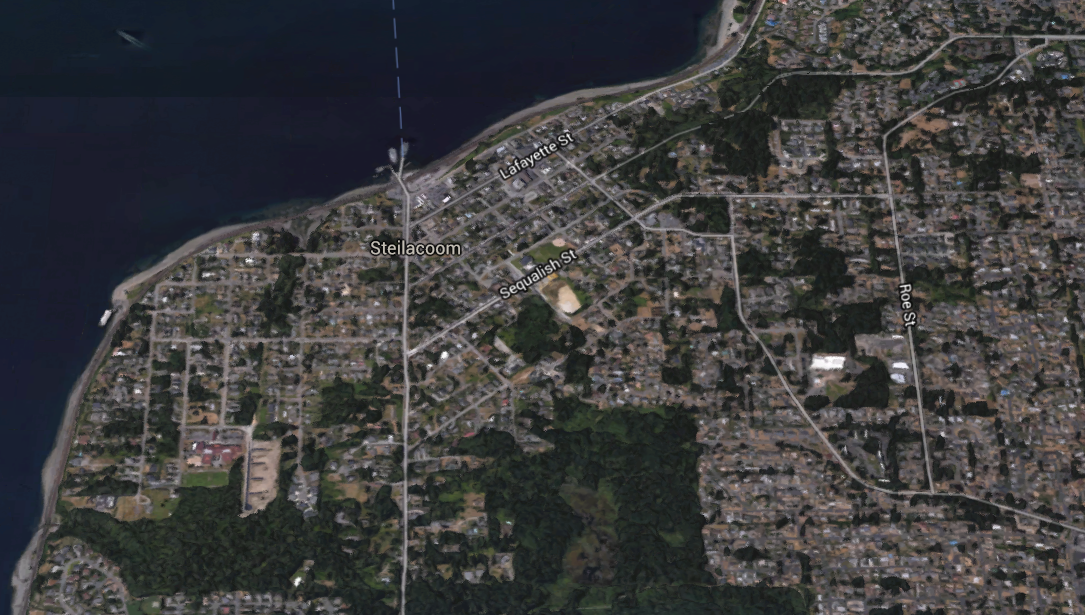 Steilacoom is a small town of just over 6,000 residents located along the shore of the Puget Sound, south of University Place and to the west of Lakewood.

Being located so close to the ocean, expect to find homes with great water and mountain views and likewise expect homes to be priced at a premium to more inland locations. While located on the shore, residents can access Interstate 5 through Lakewood up North to Tacoma and Seattle.

View all the latest homes for sale in Steilacoom

It was Peter Puget of Captain George Vancouver's crew who explored and mapped Puget Sound in 1792 and as was the tradition with explorers at the time, the area was named after him.

Steilacoom was founded by two rivals in the same year, a Captain Lafayette Balch and lawyer named John Chapman. Both filed land claims in 1851 adjacent to one another. While Balch named his area Steilacoom Port, Chapman named his Steilacoom City. Both were merged in 1854 by an Act of Territorial legislature.

When Pierce County was organized in December of 1852, Steilacoom was selected as its County Seat. The town has some of the oldest residences in the State. Be sure to visit the Steilacoom Historical Museum on Main Street or the Steilacoom Tribal Cultural Center and Museum on Lafayette Street to learn more about the history of this region.

While the town in small in population, it maintains a number of pristine parks for its residents, including the Community Center Park, Perkins Park, and Sunnyside Beach Park. Steilacoom also has a large community center which offers a variety of adult and youth programs year round.

In addition to the regular programs offered at the community center, residents can also enjoy a variety of festivals and celebrations held in Downtown Steilacoom, such as the annual Apple Squeeze, a long standing tradition that celebrates the fall apple harvest with live music and a variety of opportunities to enjoy apple based foods.

During the summer you can enjoy the well-attended Farmers market and concerts in the park (June to August) on Wednesdays at 6.30pm. For an education about the area’s history. If you get onto Chambers Bay Road and drive North, you will arrive at the location of the 2015 USGA tournament, Chambers Bay Golf Course.

Steilacoom has a lot of charm and natural beauty. It has also become a popular bedroom community for soldiers based at the Joint Base Lewis-McChord which is only a 20 minute drive.

For more information on Steilacoom, you can visit the city website.

You can find homes with spectacular views of the ocean and snow-capped Olympic Mountains. Three or Four bedroom homes will generally start in the $260,000 - $325,000 range and will go up to $750,000+ depending on the size, age and importantly location of the property.

You can also search for homes in neighboring University Place, Lakewood, Gig Harbor or Tacoma.

If you have a question about a home below or would like a market report or discuss your needs in person, please email or call me at (253) 222.5911 anytime. I look forward to speaking with you.

Own a historical piece of Steilacoom that has not been listed for 35 yrs!"The Columns" is a spectacular house situated on two lots in the heart of Steilacoom with VIEWS f...

It's all about THAT VIEW! Enjoy the sun shimmering off the water and the incredible Panoramic Bay View from the formal Living, Dining, Kitchen & Master bedroom! This incl...

Welcome home to Ketron Island!! Here's your change to own a truly desirable island home that offers solitude, privacy and bountiful marine life. Take in the views of Puge...

Lovely Home! Your galley kitchen is filled w/cabinet & counter space, ready for your culinary prowess. The bright living & dining rooms are perfect for your favorite pe...

Courtesy of PNW Towns and Sound

With little to no inventory in gorgeous Historical Steilacoom, this one is sure to go fast! 3 bed 1 Bth rambler, fenced back yard, swing set stays, garden area, nice amou...

The database information herein is provided from and copyrighted by the Northwest Multiple Listing Service (NWMLS). NWMLS data may not be reproduced or redistributed and is only for people viewing this site. All information provided is deemed reliable but is not guaranteed and should be independently verified. All properties are subject to prior sale or withdrawal. All rights are reserved by copyright.
Like or Share
Loading likes...

Welcome to Pierce County Homes! Your one-stop personal and expert full service resource for selling and buying your next home.